A Rifle Built for the Mountain Hunter

This is my Gunwerks ClymR rifle. There are many like it, but this one is mine. This rifle is about high-performance with its carbon fibre stock, carbon barrel, titanium action. The gun is built for long-range, lightweight mountain hunting, which is exactly what I need. I’ve been using this one for a couple of years now, and it’s performed amazingly under every condition.

The ClymR stock is a little bit shorter than normal. It has a negative comb, which minimizes muzzle rise while shooting. The ClymR has a flat toe line for straight recoil tracking. The grip on this system is fantastic. I love the vertical angle for supported shooting and the thumb shelf for when I’m ready to go.

I love that thumb shelf position that it provides for me. And then it’s just a matter of touching that trigger. My stock is carbon fibre, and that’s about a pound and 1.9 pounds with all the hardware on it. And you can also get it in fibreglass, adding a half-pound. Another great thing about this system that I use is I’ve got a 20-inch carbon wrap barrel.

This short barrel really keeps this weapon compact as when I have it on my backpack and a bush bashing. It’s not always getting hung up on the bushes.

A really great addition is a directional break, which minimizes recoil, letting you get back on that animal for the second shot. The internal magazine makes for easy loading, easy unloading, with the 7 mm SAUM, which I’m shooting here. It only allows for two in the magazine because obviously, it’s a fat cartridge, and they’re trying to keep everything compact.

I have two cartridges in the magazine, and then I always throw one in when I’m ready to shoot, giving me three bullets available to me at all times. It has an integrated Picatinny rail in the stock, which is really nice because it leaves the stock flush.

To sum up, the Gunwerks ClymR is a hunter’s rifle, built for those looking for a flawless set-up and know how important the rifle is for making every shot count. 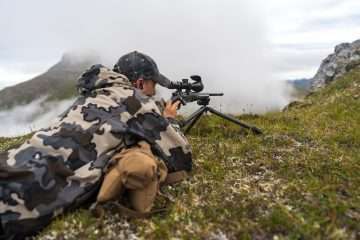 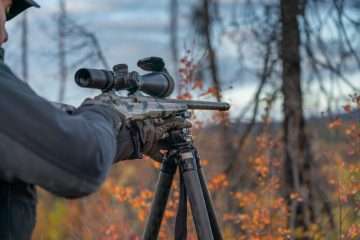 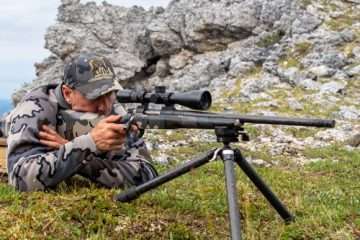 What should you look for in a mountain hunting tripod head? Is this a piece of gear you should ignore, or can it be a link in your hunting chain that improves your odds of Read more…